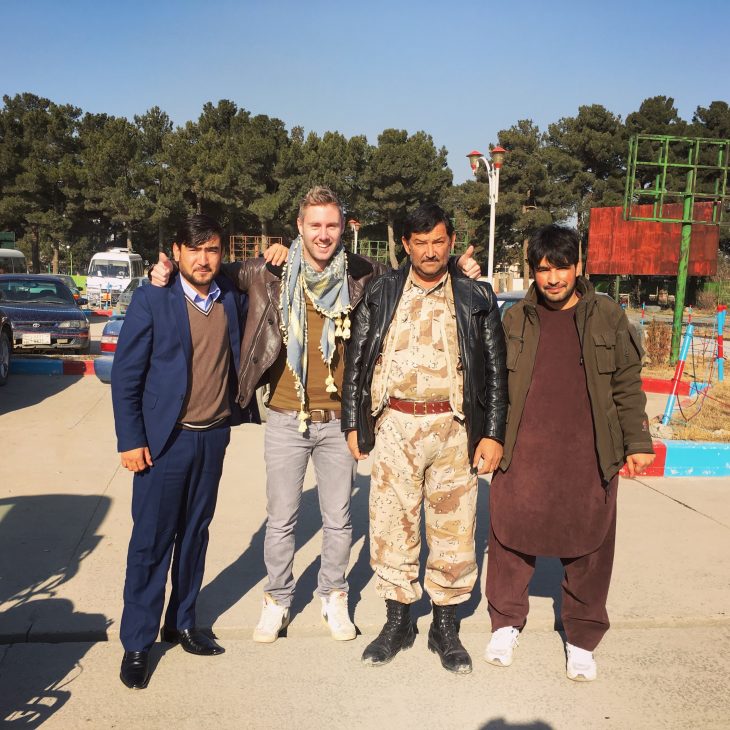 From one travel blog to several hundred websites, Johnny Ward has built Step4Ward Media from the ground, sharing life on the road with thousands of online followers. Conor Forrest caught up with the busy blogger to learn more about the business and his plan to visit every country on the planet.

Monday to Friday, 9 to 5, is a schedule that most of us must contend with, whether by choice or through necessity. There are some, however, who have rejected that notion, leaving behind the traditional working world to follow their dreams. Take blogger and entrepreneur Johnny Ward, for example.

Ward’s desire to travel the world was sparked at a young age – growing up in a single parent family without much money in Co Down, he recalls being jealous of his more affluent classmates jetting off for the continent or the US, while he remained at home. His chance came when he left university, where he had studied finance, completing his last exam on a Thursday afternoon and boarding a plane the next morning at 9am for the US, where he funded his sightseeing by working as a counsellor in a special needs camp. When he returned to Belfast, the travel bug had well and truly blossomed. Boosting his bank balance once more by taking part in medical research, he got himself a TEFL (teaching English as a foreign language) qualification and booked a one-way flight to Thailand in 2007, spending the next two years jumping from pillar to post in Thailand and Korea, teaching English, using his savings to do some travel, and then returning to the English schools when his coffers ran low.

Building a Brand
Ward’s travels in Asia continued until 2009, when he began to wonder if he should settle down and get a ‘real job’. Rather than move back to Ireland his itchy feet took him to Australia, where he found a well paid job doing business to business sales. He was undoubtedly successful, earning $20,000 commission in the space of one month, but he wasn’t happy. However, the burgeoning blogosphere was about to offer some much-needed inspiration, sending his life on a tangent he might never have imagined.

Ward had heard about several travel bloggers making decent incomes from advertising on their travel blogs. Having read several of the more popular blogs, which he dismissed as “generic rubbish”, he figured that his own travel experiences over the years were interesting enough to share with the world, and started his own blog, One Step 4Ward. Within one year he was making enough money from one blog to never teach English again. More importantly, it gave him the freedom to follow his own path and drive his own success.

“I just think people need to get online. I feel like it’s such a redundant mindset to quantify people’s output by the amount of hours they physically spend in an office, it’s such an antiquated belief,” he explains. “The output should be the actual output, it shouldn’t be based upon the salary you get paid, the amount of hours that you spend in the office, or having to commute to work. I feel like in 50 years people are going to joke about the fact that people had to do that, it’s ridiculous.”

By 2011, Ward was making $1,000-2,000 a month from just one website, rising to five figures as the months ticked by, while working five or ten hours a week. For some, that would be enough to retire from the working world and coast from country to country, or at least sit in their pyjamas all day playing PlayStation without worrying about the bills. Not so for Ward. One website barely scratched the surface of his ambition – he wanted more. Six months after moving back to Thailand, he began to wonder how much he could make from two, ten or 50 websites, and he began to expand, growing his stable to more than 250 websites, and developing what is now Step4Ward Media, which aims to help businesses understand the digital world.

Ward’s life is undoubtedly an attractive one – he talks about short work weeks, climbing Mount Kilimanjaro, swimming with sharks, attending the World Cup final, and buying an apartment in Bangkok. He’s constantly encouraging others to follow his lead, whether through the regular interviews he’s asked to do or though his blog. His sister has also started a blog and is planning an extended trip to Thailand – Ward’s adoptive home and base for three or four months of the year – with her family, and Ward his looking forward to helping her make the same break that he did.

“The first thing that people need to do, if they want to be free, they really need to get out of that mindset where we attribute success in the workplace by grinding out the hours. If you were to say to your family and your friends ‘I don’t really like my job, I’m going to spend the next 40 years of my life fighting to get to the top of the pyramid’ – bearing in mind that it is a pyramid, there’s only room at the top for X amount of people – people would think that’s completely sane to do that!” says Ward. “Whereas if you were to tell someone ‘Listen, I read about this Irish guy online, and he seems to have got it figured out a bit better, I’m going to go and spend two or three years risking it all and see if I can actually live a life that I want to live. But people would think you’re mental to try that, but you’re completely sane to spend 40 years doing the opposite! Madness. And anyway, if you fail you’ll have brilliant fun at least.”