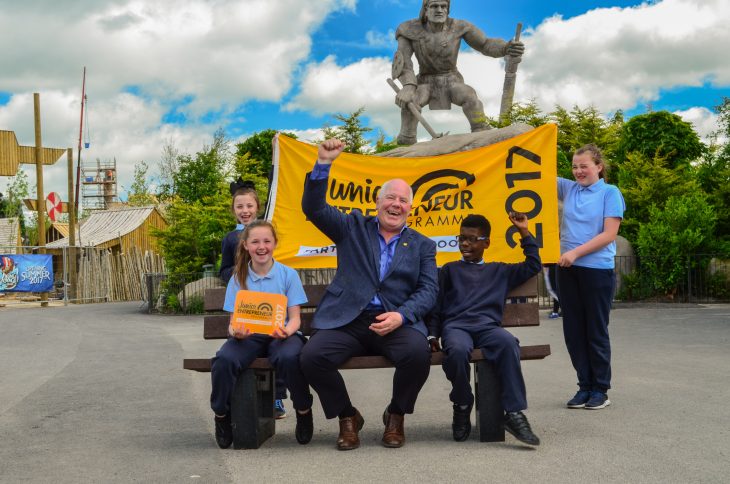 He’s an entrepreneurial veteran and might not be finished yet. Michael Dawson, the founder of the Gift Voucher Shop, spoke to Better Business about his road to success and why it pays to show appreciation.

Are entrepreneurs born or made? In the case of Michael Dawson, it would appear he was born that way – from running the school shop, to selling sandwiches in petrol queues during a fuel shortage as a child. When he left school he went into youth work and then spent a number of years as national youth organiser with Fianna Fáil, until Italia 90 presented an opportunity.

“There was a lot of people giving out about the price of tickets and having to travel all the way to Italy; it was beyond most people’s reach to get to Italy so I thought ‘what if someone took Italy to Ireland?’ I rang Jim Aiken, the big concert promoter, and I said, ‘here’s an idea for you.’ Jim said he was heading off to Italy for the matches himself so he wasn’t going to be around. So I started to look at organising screenings of the matches myself and before long I was committed to doing this monstrous event, which was an outstanding success that I made a fortune on. So I said, ‘ah here, I’ll have to give up this whole politics lark, and move into business’.”

Successful entrepreneurs usually share a quality of resilience and Dawson had to display a fair amount of bouncebackability after his next move, one he describes as his “PhD in business” – the first of several. He organised a series of drive-in movies in the Phoenix Park but, in typical Irish fashion, the weather didn’t comply. “That year it just rained and rained and rained so I lost a fortune on it. But I was committed to the business at that stage and like any good entrepreneur, you shake yourself down and start back up again.”

Dawson’s next venture was a lottery product which took him to the United States for six years, a time when the Celtic Tiger was roaring back home. “I was very often feeling sorry for myself that I was off in the States developing this business when everyone back home was making money for doing very little: investing in property, buying sites and becoming property developers. In hindsight, I was probably very lucky that I was out of all that because had I been involved, I’d probably be up to my eyes in it and still paying off the debt now.”

The lottery product never really took off, and Dawson returned from the States around the turn of the millennium. The idea for One4all hit when he was tasked with some Christmas shopping.

“My late wife asked me to buy a voucher for my mother for Christmas. But unfortunately, it was for Jurys Hotel which was on the southside and we lived on the northside, so it meant in order to buy a simple Jurys voucher I had to travel from Malahide over to Ballsbridge. November came and went and I never got it, and December’s first, second and third week came and went and I still hadn’t got the voucher for my mother. So the only thing I was asked to do for Christmas, I failed to do. My mother didn’t get a voucher for Jurys; she got a local restaurant voucher from Malahide. But she did spark an idea.”

There had to be a better model for the voucher business, he thought – “even in the best of shops – you went in to get a voucher and you were given a till receipt stapled on to an old card, and if you lost it, that was the end of it.”

Though Dawson’s lottery product hadn’t taken off, it had given him an insight into networks and the importance of connectivity. He began to talk to retailers and asked if they’d pay if he was to sell vouchers for them. He spoke to An Post about using their computer system, and they got on board.

One4all’s revenue is commission-based. Vouchers are sold and when they’re cashed – and only when they are cashed – whatever store they are cashed in pays a commission. In the meantime, funds are safeguarded by law and under EU regulation. One4all has no access to them – at any given time there’s in excess of €100 million in funds on deposit. If a voucher hasn’t been redeemed after 18 months, One4all charges a management fee of €1.45 per month. If a voucher is lost, it can be replaced due to electronic tracking.

Vouchers are redeemable in thousands of retailers across Ireland. Sales come through four different channels: the post office, online, a corporate channel, and the Post Point outlets in convenience stores. The post office is still the biggest channel, growing in double-digit figures for the sixth year in a row. Corporate sales boomed when the Government increased the small benefits relief from €250 to €500. Online sales are growing around 55 per cent year on year again, faster than any other channel.

One4all is now the biggest gift card supplier in the UK. Right now it’s doing around twice as much business in the UK as in Ireland. Eventually Dawson believes it should be able to do around eight times the volume that it does here.

It’s also the biggest voucher in Malta, a site Dawson said was set up as an international testing ground and to show Royal Mail that it would work internationally.

In terms of Brexit, Dawson is fairly optimistic. “It’s not going to affect us too much. We did get our e-money licence through the Financial Services Regulator in the UK and we transported that back across to Ireland. It’s not clear yet exactly what is going to happen there but we’ll be making an application to the Central Bank in Ireland to get a licence for Ireland separately just to cover ourselves in the event that we can’t transport that out of the EU.

“We don’t believe that it’s going to cause us any great problem. Our sales right now in the UK are buoyant and strong and they haven’t seen any sort of a dip. If both economies falter a little bit because of Brexit, we will see it.”

Dawson is on the board of the EY Entrepreneur of the Year Alumni who recently conducted a survey on its near-500 alumni’s attitude to Brexit. “In the survey about 90 per cent of our businesses in the North of Ireland have said they believed Brexit would have a negative impact on their business and 75 per cent in the Republic of Ireland said it would have a negative effect. Forty per cent believe that Brexit has already had an impact on their business. But Danny [McCoy, of IBEC] was saying the other day that 62 per cent of the alumni said that Brexit presents positive opportunities, too.”

Keeping his employees happy and motivated is one of Dawson’s key concerns. He’s spoken about it at the last two SFA annual conferences, and it’s something he does at One4all without the assistance of an HR department.

“There’s a huge shift in what young people want from their work. They want a much better work-life balance. They want to be thanked – the number of people who simply want to be thanked on a regular basis, just to see some sort of appreciation, and it doesn’t really happen; it’s not the culture of Irish companies to do it. If you’re going to be smart and you want to retain the calibre of the people that you need, well then you have to dig deep and you have to look beyond waving the big cheques in front of staff; you’ve got to show staff that they’re going to be appreciated.”

In terms of competing with the multinationals for staff, Dawson believes that small businesses have a lot to offer. “That culture of Googlising everything and your free all-you-can-eat breakfast and lunch, they’re beginning to get a little tired. After you’ve eaten all you can and drank as much coffee as you can, you realise you’re doing the same thing, day in, day out. There’s only so much scope for promotion; it’s dog-eat-dog. Working for smaller firms can be far more attractive because you have the opportunity for promotion, you’ve an opportunity for your voice to be heard if the company is being run right. It’s up to us in small firms to grasp what an open door is right now. This is what people want so if we recognise this, well then we’ll be ending up with the best of staff, and we’re well able to hold our heads up against the multinationals.”

The entrepreneur is neither too fazed about what the future holds for One4all or for himself. “As the majority shareholder, the final decision will always be with An Post. Whether they decide to buy us out in the future or look at selling us to a third party company, that day is going to come. I have loads more ideas to inflict on the world as soon as that day comes. I’m like a greyhound waiting to get back out of the traps again.”

Pictured: Michael Dawson at the launch of the Junior Entrepreneur Programme 2017