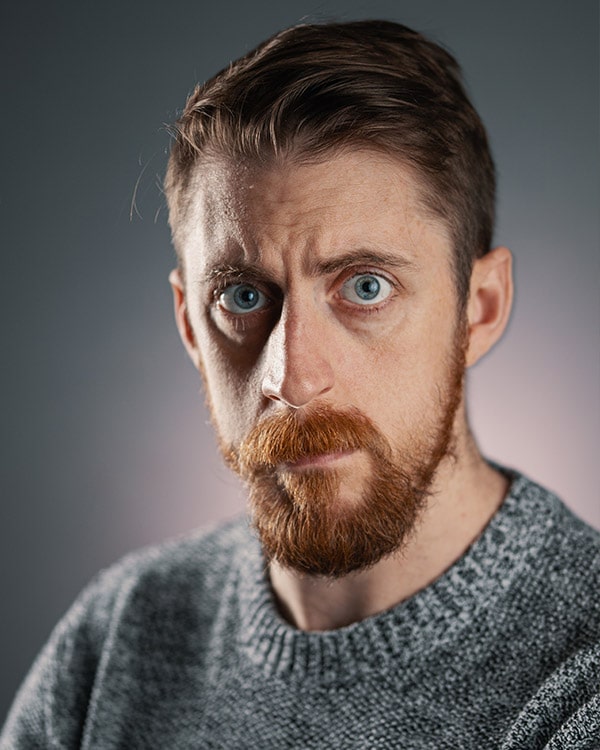 With ‘Darren & Joe’s Free Gaff’ breaking records on the RTE Player, comedian and actor Joe McGucken talks to Better Business about his slow-burn success and what’s on the cards for 2022

In ‘Darren & Joe’s Free Gaff’, our titular heroes take the viewer on a surreal journey through the minds of two lads living in a Dublin gaff. Over the four 15 minute episodes, Darren and Joe take a trip down the back of the couch into no-man’s land, go trick or treating at Mad Frank’s house with devastating consequences and in one episode, Darren’s pal (comedian Killian Sunderland) shows exactly why a decomposing body makes for the best kind of fertiliser. It’s a bizarre, strange and totally hilarious show and not one you’d expect to come across on the RTE Player. Written by Darren Conway and Joe McGucken, the show has proved a hit with viewers, becoming the most popular original series on the RTE online platform. “We’re really happy with the reaction that the series has gotten on the Player. I’d personally love to have another series that airs on TV; it’s longer form and there would be more of a budget. I’d also get my ma’s approval as she doesn’t know how to use the Player. She’s more impressed with the ads than with the show itself. If we were to get another series on the Player, that would of course be great but if they wanted to do something on a bigger scale for TV, we’d be well able for it. At the moment, we’re happy just to be making content.” 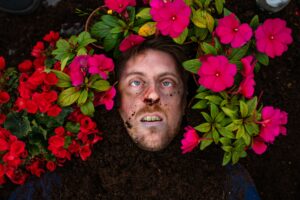 Joe began collaborating with Darren about a year and a half ago, creating online sketches and content before RTE came knocking. He puts their chemistry down to similar childhoods, growing up on the northside of Dublin and sharing the same dry, often surreal sense of humour. Joe grew up in the Dunne Street flats in Summerhill, Dublin 1. About three years ago, he and his family moved to Coolock. “It felt like we were moving out to Rush or Lusk. If you have to get a bus into town, what’s the point?! I’d prefer to live in the inner city; I know the area well and I know the community, but it’s just too expensive. Where we are now is great, it’s very suburban and quiet, but that can be boring at times. I miss the chaos and craziness of town. You walk to the shop and you have a story when you come back. There’s always something going on. When you’re raised in the inner city, it’s like being raised in a small village and I miss that sense of community.” 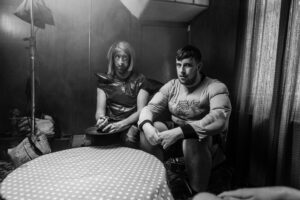 An attention seeker at heart, Joe has always been interested in comedy and film-making. As a teenager, he was part of a film club (of which Irish actor Barry Keoghan was also a member) who spent their time making short sketches for YouTube. MTV, Tom Green and Jackass were their inspiration, “that crazy, loud, brash comedy that if I watched now, I would probably hate.” As an older teenager, US comedians like Kyle Mooney drew his attention and his own individual style began to emerge. “I wanted to do what they were doing and that’s how things started to develop.” Joe’s local youth club sent him on film courses where he learned the technical side of film-making. “I worked on a few community TV stations like DCTV back in the day. I then went on to do television production and operations in Ballyfermot College. It’s only in the last five or six years that I’ve stepped in front of the camera. I have a sketch group called the Windup Merchantz and at the start, we couldn’t find any cast members so it was easier for me to do it. It worked and now, I love it.” Alongside the Windup Merchantz, Joe hosts a podcast with Darren called ‘Stall It’. He’s also starring in a new Irish comedy horror that’s due out before the end of the year. Although his success is relatively recent, it’s been a long time coming. Was he surprised by his catapult to fame? “To an extent; I was surprised because I’ve been doing this for so long and nothing had happened, but on the other hand, I’m not surprised because I think the content that I’m creating is good enough to be recognised. There’s a feeling there of justification that things are finally happening, it’s about time!” 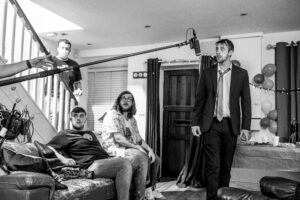 Back in 2018, the Windup Merchantz made a sketch about the government lifting the ban on pubs opening on Good Friday. When the pubs reopened after Covid, the sketch was repackaged and seen by hundreds of millions of viewers. That viral video bumped Joe’s profile and got him a job, as a content creator for a betting company. He has since left that role and taken up comedy and film-making full-time and although the future looks bright, there’s a fear that the work could dry up. “When we finished shooting ‘Darren & Joe’s Free Gaff’, there was about three weeks of complete radio silence. There was a bit of anxiety around that, but thankfully the work started to come in again. There will probably always be a bit of fear there, but I have confidence that it’ll work out.” The pressures of juggling a full-time job with two young children as well as his comedy and acting work had also started to take its toll. “That’s another reason why I quit my job. It was affecting my mental health; there was no time just to sit and play the guitar for half an hour or to enjoy spending time with the kids. Finding the time to come up with new ideas for sketches was also really difficult so leaving the content creator role was the right thing to do, it was so liberating.”

2022 is shaping up to be a busy year for Joe. Another season of ‘Free Gaff’ may be on the cards, ideally on a larger scale. He’s in talks to develop a pilot for a show that he has written and is keen to get back to the world of stand-up. “Myself and Darren are planning on doing live shows with the podcast next year. I also have an idea for a short film that I’d like to get made and do a screenwriting course. I became a member of the Writer’s Guild of Ireland this year so ideally, would like to lean on the writing side of things a bit more. When I say it all out loud, there’s actually loads going on! I’ve got big ambitions and am looking forward to the future.”