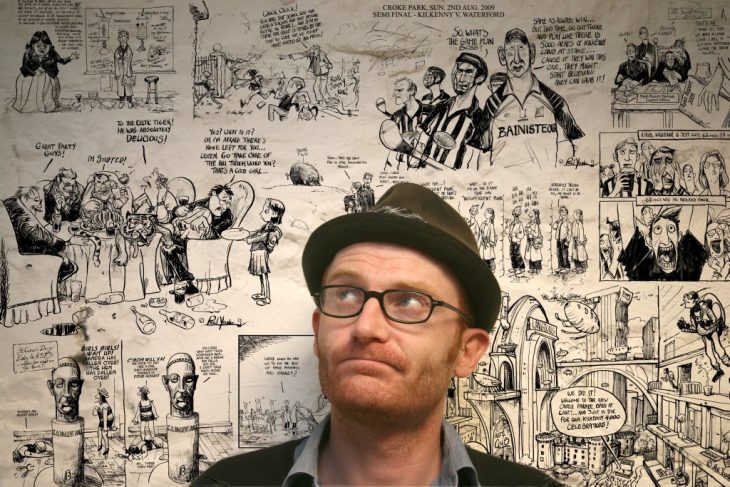 2015 has been quite a year for illustrator and cartoonist Paul Young. The humble Roscommon native spent the summer promoting Song of the Sea, the Oscar-nominated animated feature film which he produced.

He has also been named as an EY Entrepreneur of the Year finalist, not to mention joining forces with Hollywood A-list star Angelina Jolie on upcomingfeature The Breadwinner. He’s even landed his dream job as a newspaper cartoonist. InBUSINESS spoke to Young about how, despite now being recognised as an entrepreneur, he is still holding on tight to his pencil.

BB: Can you give us some background on how you first became involved in animation?

PY: I was always into drawing. I grew up in Boyle, Co Roscommon but I went to art college at the University of Ulster in Belfast. I took a few years out travelling and doing caricatures in places like Greece. After that, I went to Ballyfermot College to study animation because that seemed to be the best way to get a job in the industry. That’s where I met Tomm Moore and Nora Twomey. When we finished college we all went down to Kilkenny where we started to work on the trailer for what became The Secret of Kells.

BB: You’ve obviously had a fantastic response to Song of the Sea but how much of a gamechanger was The Secret of Kells being nominated for an Oscar in 2010?

PY: It certainly helped and it was a massive surprise. We went to the States and had some screenings there beforehand. There was a bit of a delayed reaction in seeing the real benefits from a business perspective but it certainly did help because word about the film started to get out and DVD sales picked up in the States, before it finally went on to Netflix. It was then that people started to understand who Cartoon Saloon were and we started to get interesting offers to partner on films, some which we explored and some which we didn’t.

BB: How difficult is it to get funding for an animation film in Ireland?

PY: It took us a long time in the beginning. There’s only a couple of people making animation films in Ireland. Having done two in the past ten years we are pretty prolific in that sense. Most studios are doing television, short films and commercials.When we started the company we had an idea for the Secret of Kells, which ended up taking us seven or eight years to get going. The way we did it was through European co-production and having partners in France and Belgium after attending an event called The Cartoon Movie that took place in Potsdam, Germany. It was there that we met a French producer who agreed to partner with us. What I found interesting is that you really need to meet people seven or eight times before you’re ever going to do business with them. You have to believe that you’re going to be around in another five years. Animation is a long process. People want to know that you’re around for the long haul.

BB: Is there anything more the Government could be doing to support the animation industry?

PY: I’m very happy that the Government has kept Section 481, the tax rebate scheme for film and television. We’re the envy of the world with it. One thing that would be a great help is if the Government could introduce more co-production treaties. Canada has a co-production treaty with almost every country in the world and it has helped their industry to no end. In a lot of countries there is a set budget on the amount that has to be spent on children’s television and animation. We don’t really have that here and it would be great to have more incentive for Irish producers to do more animation for Irish audiences. As it stands, we could end up with a lot of Irish children growing up with American and UK accents. It’s impossible to finance Irish animation without going outside the country and then you’re left with the pressures of making it more international. We have tried to counter that with Puffin Rock, our TV series which we have now sold to Netflix, Nickelodeon UK and RTÉ among others. It’s been brilliant. They love the Irish accents. We have Chris O’Dowd narrating the series along with some lovely Derry accents. The Irish accent is legitimate now.

BB: Do you see yourself as more of a cartoonist than an entrepreneur?

PY: I used to very reluctantly consider myself a producer so I’m an extremely reluctant businessman. I always want to be considered a cartoonist. I’m definitely a bit of both because we’ve had to figure out the business side of things ourselves as it was hard enough to find examples to follow. When going to the markets, such as MIPCOM in Cannes, we saw other people around Europe doing what we were trying to do so we latched on to people who seemed to know what they were doing. We’ve had to become businesspeople while holding on tight to our pencils.

BB: Do you have to look outside Ireland when attracting top talent?

PY: We do have to look elsewhere but there is a lot more talent in Ireland now which is great. The studios are doing their best to work with the colleges but there’s not enough graduates yet to have all-Irish crews. We have animators from Italy, Spain, France, Denmark and they’re a great influence so it’s a lovely mix in the studio. But we have more Irish people than we’ve ever had so that’s wonderful too.

BB: Do you have any advice for young animators who are trying to get a break in the industry?

PY: Animation is a very collaborative industry so the best thing anyone can do is to share their ideas and get working with a team as soon as possible. A lot of people sit on ideas for years. They write scripts in isolation but you really have to share your work. If you’re starting a business you should definitely go straight to the markets, even if you don’t have anything to sell yet. It takes such a long time to finance anything that you may as well start the relationships now.

BB: What are you most proud of to date?

PY: I’d say Song of the Sea, although I am pretty proud of doing a job that I always wanted to do before getting into animation, which is working as a newspaper cartoonist for the Sunday Independent. I just rang up the business editor, Tom Molly, who I had known in a past life. I was looking to do more editorial cartoons as I had been doing some for The Kilkenny People. Now I do the business interview caricature each week. It’s great, every Friday morning I get the chance to just draw. There’s nothing like a newspaper deadline either!