A Day in the Life: Eight Degrees Brewing 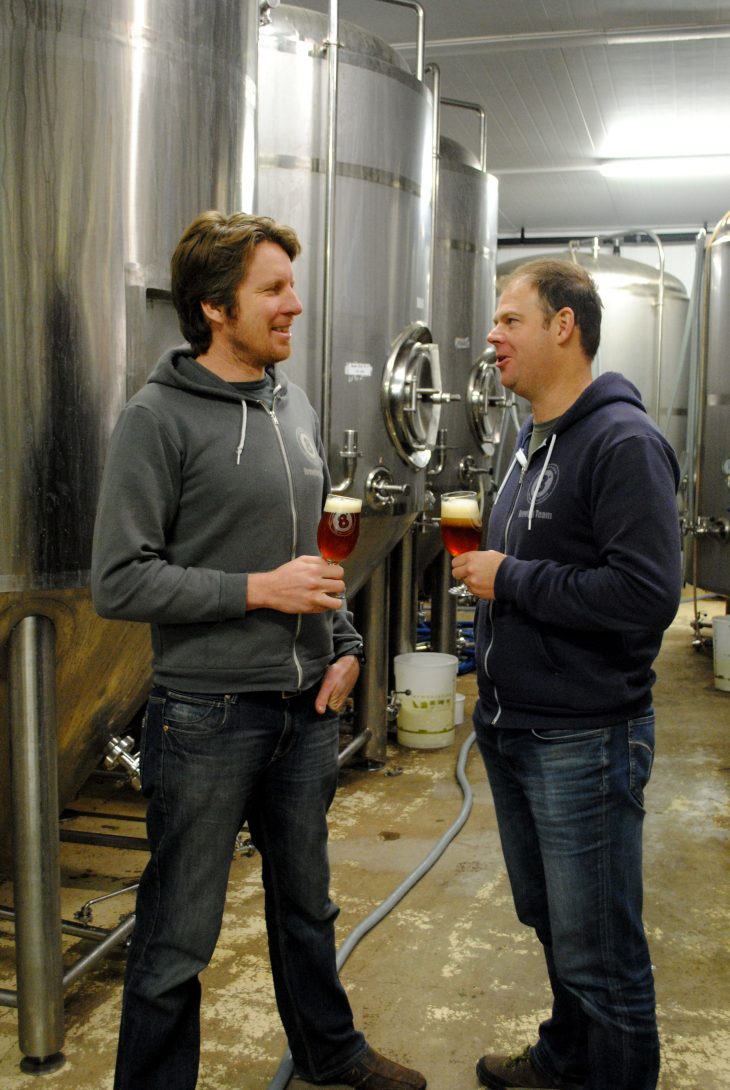 As brewmasters they have achieved something special.  Both Scott and Cam learnt how to make full flavoured beers as home brewers and then studied how to make these tasty beers consistently at the Versuchs und Lehranstalt fur Braurei (“VLB”) institute in Berlin.

Cam, the Aussie, is trained as a chartered accountant – but more of an adventure seeking, sports crazed, beer loving kind of accountant than the nerdy, pale, office bound kind.  Scott, the Kiwi, is a water engineer who tries to mix his loves of epic travel and air guitar at any available opportunity.

6.00AM Mike, our head brewer, arrives early to start the brew. It’s not quite 6am on a dark and chilly winter morning. Mike is excited as we are brewing a beer to celebrate five years in existence, called ‘Nailed It’. It’s a cheeky name but we all have high hopes for the IPA. Before that he is preparing the first brew for the day, the flagship beer Howling Gale Pale Ale. He turns on the boiler and makes sure the water is the right temperature before getting the mill ready to crush the malted barley and deliver it into the mash tun. The mash in is warm and takes the chill out of the air.

7.00AM Meanwhile John, our packaging technician, has arrived. He checks the production plan before he starts to clean and sterilise the bottling machine. Dan and Brian arrive and begin making up cases for the bottles and readying the keg filler. Dan and Brian are upset that their beloved Arsenal have again lost in last night’s Champions League match! Oh well…

8.00AM Before long the packaging area is bustling with activity; bottles being filled, capped, labelled and put into cases whilst kegs are cleaned and filled with beer from the bright beer tank. It’s noisy work, earmuffs are a must, but it allows the boys to listen to their favourite tunes or podcasts whilst working.

9.00AM The rest of the crew has now arrived and a brew is on, coffee this time. It seems co-owner Scott is almost as particular about his coffee as the beer we produce. Paudy, our office manager, checks his emails, another five orders already – it’s a busy dispatch day too it seems!

10.00AM Mike has now cleaned the fermenter and conditioning tanks and arrives into the office, requesting a quick meeting; we need to go through the recipe for Nailed It one last time. Scott, Cam (co-owner) and Caroline review the recipe, Mike makes some last minute edits and we all agree it’s going to be a beer to look forward to.

10.30AM A truck arrives as the last of the coffee is downed, 52 pallets of empty bottles. Scott gets the forklift and spends the next hour taking the pallets carefully off the truck and into our warehouse. Almost 100,000 empty bottles are ready to be filled.

11.30AM The first brew is now being transferred into the kettle, hops are added and the boil commences. Mike now prepares for the ‘sensory analysis’ session (also known as beer tasting), the best part of our day. It’s not quite noon but Derek is already here. He’s in for the second brewing shift but doesn’t want to miss tasting some of the new beers. Mike, Derek, Cam, Scott and Caroline, our marketing guru, all sit in the conference room for our eight beer blind tasting and review.

1.00PM It’s tedious work (but with beer!) with lots of discussion about water chemistry and some suggestions to alter the dry hopping rate for our next limited release. “Good idea,” says Scott. But Cam is not so easily convinced, knowing the added cost of the prized hops. But, as always, quality wins out. Hoppy days ahead!

You can find this article on page 56 in Better Business magazine with many more inspiring articles. Check out the digital issue below.