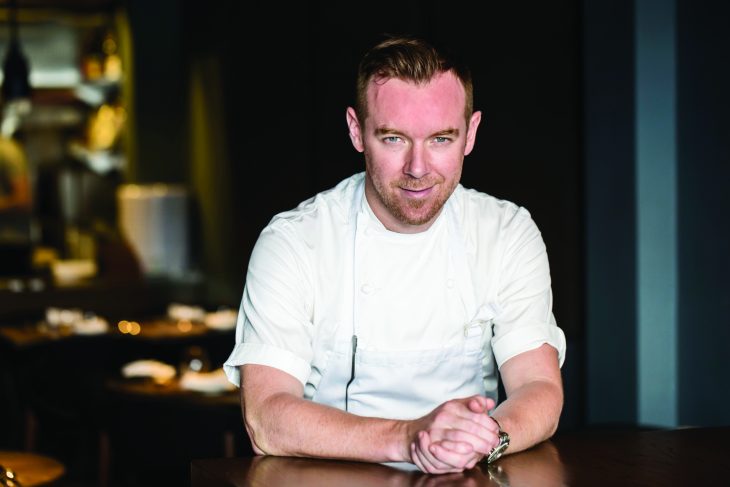 As one of the top food cities in the world, Singapore has a remarkably diverse range of culinary influences. A melting pot of culture has resulted in a cuisine unlike any other and many visitors are drawn here by the vibrant culinary scene. Traditionally known for its outstanding street food, a string of fine dining establishments have popped up in this bustling city obsessed with food. Taking influences from his experience working under some of the best in the business, including Tom Aikens, Richard Corrigan and Brad Farmerie, Irish chef Andrew Walsh dishes out his creative brand of modern European food in a vibrant and relaxed social setting at Cure, one of Singapore’s most renowned eateries.

The Mayo native describes how his love of food first developed. “My interest in cooking started while I was in my teens,” Walsh says. “At that time, my brother was working as a chef in our hometown, and had asked me to help out with washing dishes in return for pocket money. Along the way, I picked up the basics and became completely fascinated with how you can play around with a raw ingredient and turn it into something delicious.”

After cooking under the tutelage of some notable names, Walsh decided to strike out on his own with his first restaurant venture in 2015. Innovation has been a central element in the success of Cure and Walsh has introduced a plant-based menu where the intrinsic flavours and versatility of vegetables are showcased by using a combination of cooking styles and techniques.

“In recent years, I’ve been really keen to spotlight vegetables as much as meats, instead of sticking to conventional meat-heavy mains,” he states. “The menu at Cure is in constant flux, as I work with seasonal produce and what’s available locally. Some ingredients are at their peak for a very short period, and, in order to bring their optimal eating quality to our guests, our menus change every two months, or sometimes even every month. I continuously challenge myself and I’m never afraid to put something new on the menu.”

When asked about the practicality of operating a business in Singapore, Walsh believes an understanding of the culture, geography and produce of the region has been vital in his success.

“I first came to Singapore to run my mentor Jason Atherton’s concepts – Esquina and The Study – but fell in love with the burgeoning scene and bustle of Singapore,” he explains. “Drawing from my experiences working in Ireland, such as during my training at Michelin-starred The Fitzwilliam Hotel in Dublin, you have to be really familiar with the local culture. In Singapore, operating a restaurant business is a little trickier and tougher, because we have to source many ingredients from overseas. We’ve had to learn what kinds of food concepts work in different locations and countries.”

“The Singapore restaurant market is very strong, as it’s very globalised. So we’ve adapted to this by having a lot of interaction and communication with guests, and offer various menus to suit the different requirements of our diverse diners.”

Walsh has been a forerunner in the production of nutritious food within a food industry that protects the natural environment and local community. An avid campaigner for greater social causes, he sheds light on his view of food sustainability.

“Food waste has always been an issue in the industry,” he explains “At Cure, we tackle these issues through our root-to-stem food philosophy and repurpose what is usually deemed ‘trimmings’ in other dishes. One example is our Slow Cooked Egg dish, which uses leftovers from our homemade sourdough. It adds extra texture to the smooth smoked potato espuma which elevates the entire product.”

Related Content   We Make it Work: Republic of Work

Equally passionate about eradicating hunger, Walsh is also involved in an initiative titled Hospitality Against Hunger, which encourages guests to donate any amount to The Food Bank Singapore for each complimentary snack served at the restaurant.

The Irish chef has continued to extend himself beyond the kitchen with the opening of Butcher Boy, a contemporary east-meets-west grill restaurant driven by innovative cocktails and a great selection of sake. Walsh explains the concept behind his second Singapore restaurant.

“At Butcher Boy, I’ve taken inspiration from my travels in Asia and Singapore, with dishes such as Korean Steak Tartare and Chicken and Prawn Laksa Dumpling. This offers diners a unique take on familiar flavours, but in a different form, or paired with unconventional ingredients. I love playing around with flavours to see what new discoveries I can find.”

Looking to the future, Walsh will continue to innovate within the Asian market, but also hints at possible expansion – and even a return to Irish shores.

“I’m on a fascinating journey of culinary food research and discoveries,” he enthuses. “Our goal at Cure and Butcher Boy is simple: we want to keep getting better in all aspects, whether in terms of menus, staffing, styles, infrastructure or operations. One of my ambitions is to eventually set up in London, Dublin or the Irish countryside. One day, I hope to return to Ireland and do my style of food, whether it’s drawing from Cure, Butcher Boy, or something entirely new, and put my stamp on the food scene there.”